From the Origins of Coffee 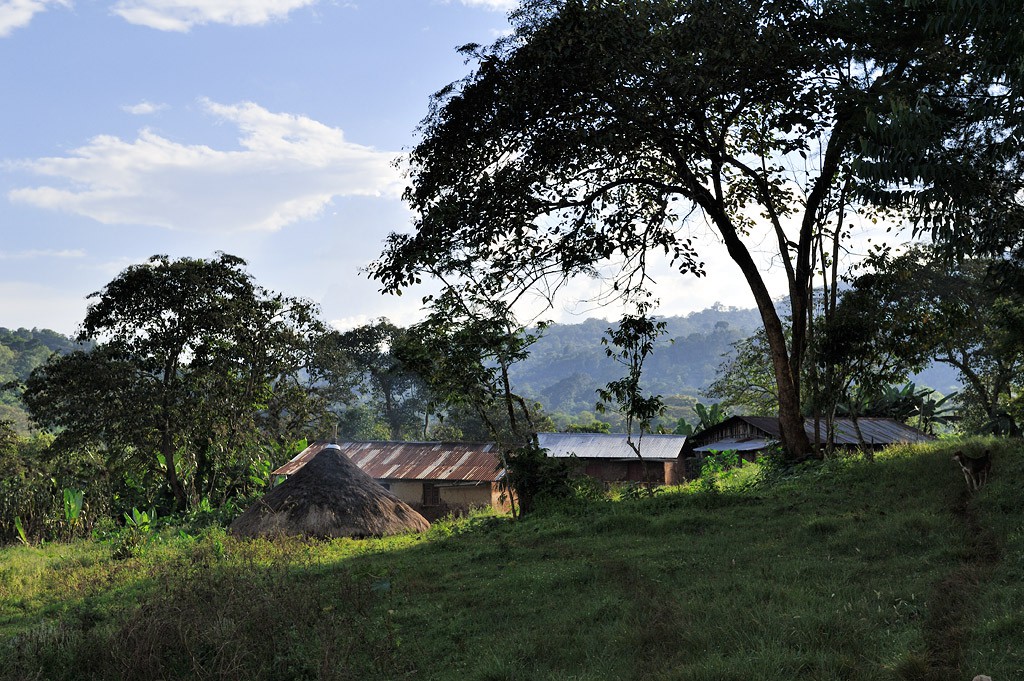 Visit to the Imam

Through my conversations with the natives, I got to know that the collection of buildings where the goatherd Kaldi had brought back the red, ripe coffee cherries, existed even today. A half hour car-ride and a 20-minute walk brought an interpreter and me right there! According to lore, this was earlier a monastery for Ethiopian Christians. Today, an Imam presides over the Muslim village from there. He is Abba Giddi and he was ready for a short, impromptu talk, and I was also allowed to photograph him. My aim was to find out more about the legend surrounding the goatherd Kaldi and its supposed veracity. The Imam narrated to me once again the story of Kaldi, whom he however, named Kali or alternately Kalliti. Then he told me with quite certainty that the history was imparted to him through the traditional form of Ethiopian storytelling by his father, which he in turn had heard from his father and so on; and since they were both very old, he alone could reflect back three generations and even a longer time period for this traditional story! “No, no, dear visitor, this is no legend, but true Ethiopian history, passed down from generations!”, Abba Giddi told me with the deepest heartfelt conviction. 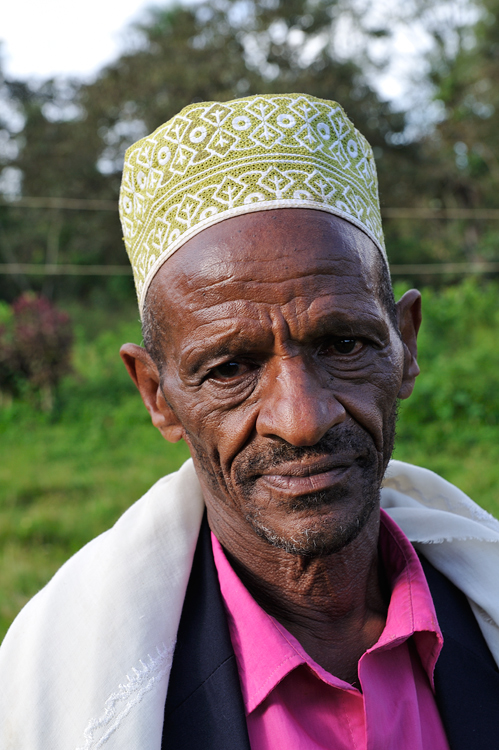 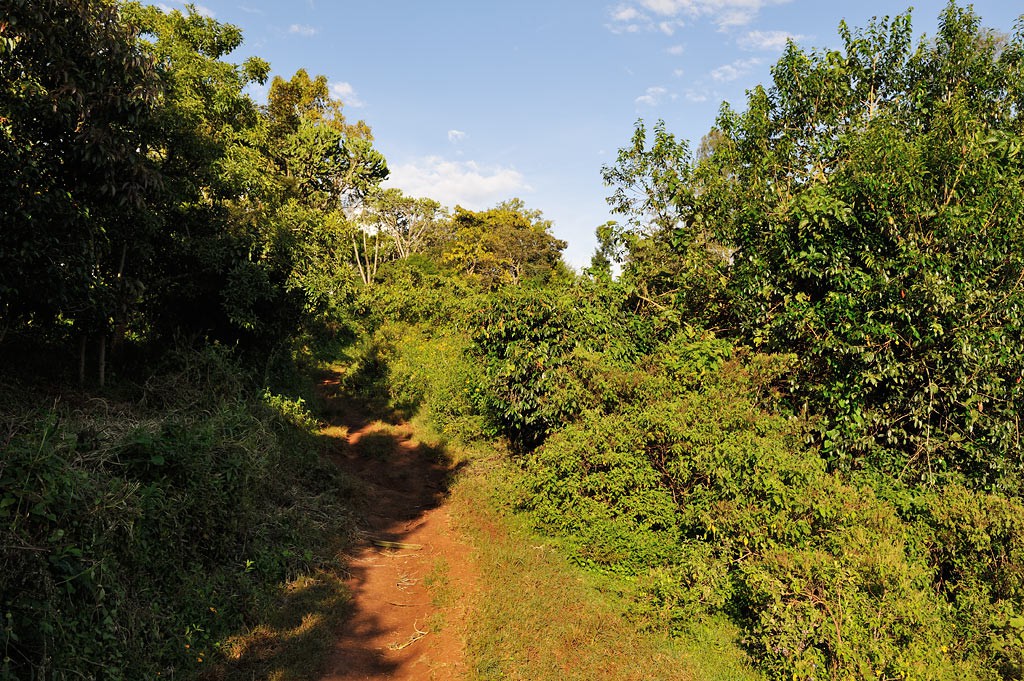 Path to the facility

Epilogue – The stories and legends of coffee

The story of Kaldi, apart from the name Kali or Kalitti, is told with three different variations. In one of the variations, as narrated in this documentary, the monks threw the coffee cherries in the fire and discovered coffee roasting at the same time. In a second variation, this part is missing; the monks try the ripe coffee berries and the roasting is discovered much later. In a third variation, Kaldi and the monks try only the leaves of the coffee trees at first and discover the coffee cherries much later, which naturally had a much stronger effect. Depending on the source, the story of the discovery of coffee dates between the 2nd century and 6th-8th centuries. The first written testimony of the story of Kaldi was written by a resident of Rome, and Lebanese linguist, Antoine Faustus Nairon, in his book, “De Saluberrima potione Cahue seu Cafe nuncupata Discurscus” in the year 1671. The legend of the Ethiopian goatherd Kaldi is the most widespread, and one is quite united in the fact that the Kaffa region in the Abyssinian Highlands in Ethiopia addressed in the legend is the original homeland of the coffee tree. However, there are still many more legends of the origin of coffee, of which I am listing for the sake of completeness, the most important.

Sheikh Umar: This legend of the discovery of coffee originated in Yemen, where the Priest, Sheikh Umar had noticed the effect of the coffee fruit on birds and spread the novel news. Unfortunately, there lacks any written reference, which could have proved the veracity of this legend.

Naironus Banesius: This Maronite monk, in the middle of the 17th century, had observed a herd of cattle behaving strangely. It struck him that that animals were extraordinarily lively, they did not rest till late into the night and showed absolutely no signs of fatigue. The monk found out that the animals had eaten the yellow and red berry-like fruits of a plant. The monk prepared a brew out of the fruits of this plant and realized that his fatigue disappeared and he could stay awake all night without a problem.

Der Prophet Mohammed: The story of the great Prophet Mohammed narrates quite a different legend. Oriental narrators report that the Archangel Gabriel appeared before the sick Prophet with a bowl of hot, dark liquid, which he called, “quawa”. After enjoying the drink, Mohammed became healthy again quickly and regained his spirit. With the help of this heavenly strength, he was able to bring together a huge Islamic empire, one that the world had hitherto never seen.

The Dervish Omar: The legend that cannot be missed is that of the young Dervish (Muslim mendicant) named Omar. He was slandered, unjustly condemned and banished to a remote rocky desert along with his companions. Finally, at his wit’s end, dying of hunger and thirst, he tried the fruits of an unknown bush and cooked a brew from it. He recovered miraculously and returned to the town and told the story of the magical fruit. Now everyone wanted a taste of this fruit, and Omar was showered with honours and he even got a palace from the Caliph.

The name of coffee

There are different theories for the origin of the name, “coffee”. The first is that coffee has got its name from “Kaffa”, that is from the region it was discovered. The second theory, which finds far more explanation in literature, claims that that name, which was derived partly from the Arabic original “qahwah” and partly from the Turkish form “kahveh” was adapted into the European languages in the 1600s.

Although the name for this drink is recognized across many countries of the world on this basis, coffee in Amharic, the Ethiopian official language is “bunna”, in another Ethiopian language “bun”, “buna” or “bona” (but also for e.g. “kawa”). The name “bunna” for coffee was given much earlier by the caravan traders, who transported the coffee across the entire Ethiopian highlands. At the time, the traders were often invited by a local family for coffee and the woman of the house prepared coffee for them. This woman was called “genne bunno” or “genne bunne”, where “genne” means woman. To date there exists a good tradition and custom of the people of Kaffa who own the coffee plants, of sending their family and friends coffee cherries or coffee beans in a package with the inscription, “bunno-Kaffa”, which means “coffee from Kaffa”.

Those who not only want to read about Ethiopian wild coffee but also wish
to try it can order it, for example, on one of these three German online shops: